Plymouth City Council, South Hams District Council and West Devon Borough Council are working together to produce a single Joint Local Plan covering their areas – the Plymouth and South West Devon Joint Local Plan. This Plan will set out the overarching strategy for the area, setting out where development will take place, what areas should be protected, and how the area will change through to 2034.

The final consultation on the plan is called the ‘Pre-submission Regulation 19 consultation’ and runs for 6 weeks from 15 March 2017 to midnight 26 April 2017. 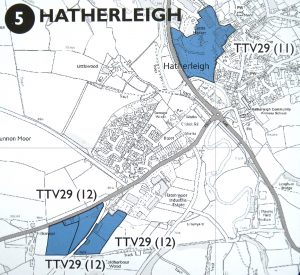 Are your needs being catered for? How big will Hatherleigh grow? How will our infrastructure be supported? If you have strong views on anything either way, let your local Councillors know. We would like to hear your views before we submit our comments.

A drop in session has also been arranged where West Devon Borough Council planning officers will be on hand to answer questions. 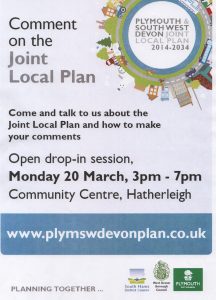 An ambitious plan for what Plymouth and South West Devon could be like in 2034 covering important issues like health, transport, homes, jobs and the economy, green spaces and infrastructure is to be considered by three Councils next week.

The Plymouth and South West Devon Joint Local Plan is going to the Full Council in each local authority on the following days:

The Joint Local Plan is a culmination of months of planning and discussions between local communities, neighbouring councils, landowners, businesses and developers, interested in shaping the future of the area.

Councillor Patrick Nicholson, Deputy Leader and Cabinet Member for Strategic Housing, Transport, and Planning said: “This plan is vital for the future success of Plymouth, West Devon and South Hams. We have planned for the new homes and jobs that we need so that the area can thrive. A huge amount of work has gone on behind the scenes to take on board as many different views as possible. Here in Plymouth we’ve made huge efforts to strike the right balance between the need for growth and protecting our important green spaces for generations to come.

“We have listened very carefully to local people – the real experts on where they live and how they want their communities to be in the future.

The plan makes provision for 26,700 new homes, of which 6,600 will be affordable homes to rent and buy, with 86 per cent planned for brownfield sites in Plymouth.  The plan also proposes 312,653 square meters of new employment floorspace to create around 13,200 jobs, with 71 per cent of the planned growth to be focussed on the Plymouth Policy Area.

Some of the key changes that feature in this crucial stage of the plan that will affect Plymouth residents include:

Cllr Graham Parker, West Devon Borough Council’s Lead Member for Strategic Planning and Housing said: “We have been working very closely with our communities to ensure that residents have had a say in future developments within our Borough.

“This next stage of the plan sets out what has been agreed since the public consultation and takes into account what our residents have said about how development should be distributed.”

“Through joint working with our neighbouring councils, we feel we have created a balanced and sensible approach to development and growth in the area.”

Cllr Michael Hicks, South Hams District Council’s Executive Portfolio Holder for Strategy and Commissioning said: “The Local Plan team across the three planning authorities have worked extremely hard over many months to ensure that as many factors as possible are taken into account.

“Having reached the final consultation stage before we submit the plan to the inspector, we are now confident that we have found a good balance between the differing views of our residents and the local needs of our Towns and Villages over the next 20 years.”

As a result of taking on board people’s comments, a number of key changes have been made in the South Hams and West Devon area:

All three councils will be asked to agree that the Joint Local Plan is ready to submit to an independent Government Planning Inspector and if approved, a final consultation will get underway and will run from 15 March to 26 April 2017.

This will be the last chance for the public to comment on the Joint Local Plan before it is formally submitted for examination. At this stage, the public and other interested organisations will be able to make comments but these need to relate to the soundness of the plan.

By continuing to browse the site you are agreeing to our use of cookies.